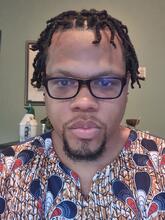 Keston K. Perry (he/they) is Assistant Professor of Africana Studies at Williams College USA. Dr Perry’s work examines the role of race in climate change, its policy implications and the financial system that underpins international climate policy that reproduces marginalization and dispossession specifically in the Caribbean and African diaspora. Dr. Perry’s work appreciates the ways in which global institutions and governing arrangements further expose Black and racialized communities in the Caribbean to acute dispossession, debt and death within the context of the climate crisis. This work makes the case for climate reparations to advance social justice and self-determination of Caribbean peoples. His work is published in Geoforum, Politics, International Journal of Development Issues, Development and Change, among others. As an economic affairs officer and consultant, he/ they recently contributed to the 2021 Trade and Development Report produced by the United Nations Conference on Trade and Development which focused on adaptation and resilience challenge. He/they were previously a lecturer in economics at the University of the West of England, Bristol, UK where he was commissioned to produce a report on climate reparations by the United Nations Association of the UK. He / they also previously was a postdoctoral scholar at the Climate Policy Lab, Fletcher School of Law and Diplomacy, Tufts University.